CLICK HERE to watch an interview with Dr. Laura Bates, founder of Shakespeare in Shackles, the world's first Shakespeare program in supermax. 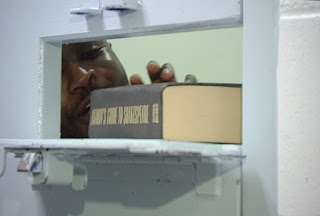 Laura Bates has a Ph.D. from the University of Chicago in Comparative Literature, with a focus on Shakespeare studies. She is a professor of English at Indiana State University, where she has taught courses on Shakespeare for the past fifteen years to students on campus and in prison.
For more than 25 years she has worked in prisons as a volunteer and as a professor. She created the world’s first Shakespeare program in supermax—the long-term solitary confinement unit.  Her work has been featured in local and national media, including two segments on MSNBC-TV’s Lock Up.
She is the author of “Shakespeare Saved My Life”: Ten Years in Solitary with the Bard (Sourcebooks, 2013).

She has been happily married for nearly thirty years to Allan Bates, a retired professor and playwright.
Posted by Jonathan at 11:16 AM