THE SHAKESPEARE PRISON PROJECT - BEYOND BARS 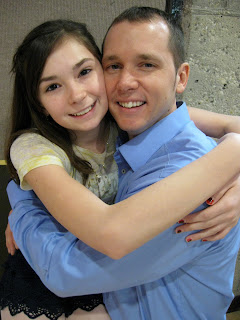 This evening about 40 people attended the very first production of THE SHAKESPEARE PRISON PROJECT - BEYOND BARS at the Rita Tallent Pickens Center for the Arts and Humanities at the University of Wisconsin-Parkside. Nick Leair, a former inmate and participant in the project, joined guest actors to perform scenes from THE TEMPEST and HENRY IV, PART 2.

Many of Nick's family members were there, including his mother, father-in-law, brothers, and a sister.  Also in attendance:  Dean of the College of Arts and Humanities, Dean Yohnk; Wisconsin State Senator John Lehman; and Emeritus Professor of English and Shakespeare scholar Andrew McLean, who has also offered Shakespeare classes behind bars. Roseann Mason, a co-author of the Wisconsin Humanities Council grant that first brought me to Racine Correctional Institution in 1995, was also there.

Nick's 12-year-old daughter Ally joined us on stage during the talk back. I asked her what her main impression of her Dad was back in 2007 when she saw him perform for the first time (in prison, where he was serving a 30-year sentence). She looked at me, paused a moment, and then said simply, "He looked happy."

Then she proudly took the stage and read the prologue from one of her Dad's favorite plays: ROMEO AND JULIET.

Two other former inmates/Shakespeare Project participants attended the program and joined in the discussion. All of them are doing well--reconnected with family, employed or in school. They credit their experience with The Shakespeare Project as an important element in the building of new identities and productive lives.

Yet another former inmate and participant in the project, Megale Taylor, was unable to attend the event, but did send a message, which I read aloud to the audience:

My name is Megale Taylor.  In the latter years of my incarceration, I was a participant in The Shakespeare Project (2004 to 2008), where I had the opportunity to play the roles of The Fool in King Lear, Roderigo in Othello, Stephano in The Tempest, and Marc Antony in Julius Caesar.  Now that I have been released from imprisonment, and have established myself as someone who is both gainfully employed, and attending college, I would like to take this opportunity to reflect on the role that The Shakespeare Prison Project has played in my life.

Psychologically, The Shakespeare Project has provided me with an opportunity to look deeply into myself, and to better understand my own fears and timidity.  Socially, it has helped me to develop the virtues of dedication and discipline.

I also learned a lot about theatre, and the craft of acting.

Dr. Shailor had us keep journals, where we logged our observations and our thoughts, explored our feelings, and examined the characters we were playing in relation to our own life experiences.

The Shakespeare Project has helped me to develop skills that I never knew I had. I have become a more caring person, a better writer, a better student, and a better father to my children.  To this day, I continue to recite some of my lines from the plays, which brings me pleasure, pride, and even comfort, because some of the passages still help me to better understand and accept some painful experiences in my life.

The Shakespeare Prison Project is a vital educational program that addresses the emotional and psychological needs of inmates, and that also brings the magic of creativity, hope, and possibility to incarcerated individuals.

IF YOU SUPPORT THIS WORK, PLEASE CONTACT WISCONSIN DEPARTMENT OF CORRECTIONS SECRETARY EDWARD WALL AND TELL HIM WHY.  THANK YOU!