Why Shakespeare Belongs in Prison 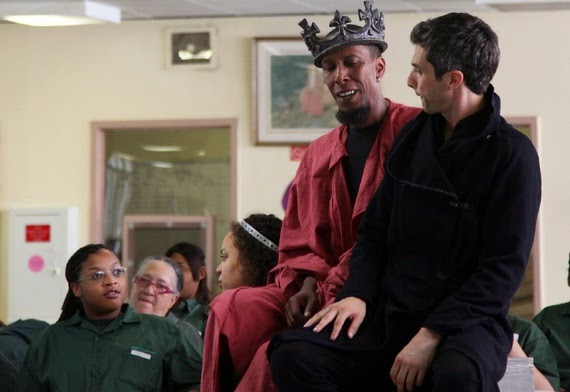 It's his 450th birthday, and The Bard has never appealed to a wider or more diverse audience. American higher-ed English departments may be teaching him less than they used to, but the Internet and modern film and TV interpretations have helped democratize appreciation of his works around the world. That’s only fitting: In Shakespeare’s era, the royalty in attendance at his productions was joined by crowds of commoners called “groundlings” and “stinkards” who paid a penny to stand in the pit, sweltering in the heat, while even more milled about outside.

n hold special significance: convicts. Recent decades have seen a proliferation of programs in prisons, jails, and juvenile detention centers meant to introduce the accused to works found in the Folios and Quartos. While arts outreach efforts in correctional environments are nothing new, any diehard Shakespearean might recognize how his works appeal uniquely to the criminally accused, one of society’s most marginalized populations.

Laura Bates, author of Shakespeare Saved My Life: Ten Years in Solitary With the Bard, described teaching the plays in a super-max facility housing the most violent criminals in the system in an interview last year with NPR. The book’s title comes from the words of one inmate, convicted of murder as a teenager and placed in solitary confinement for years.

“The day that I came knocking on his cell door,” Bates explained, “his life had been so desperate, so bleak for so many years that he was literally at the point of suicide. And so in that sense by Shakespeare coming along, presenting something positive in his life for maybe the first time, giving him a new direction, it did literally keep him from taking his own life.”

Is such redemptive artistic power special to Shakespeare? To an extent, yes. The themes and characters of Shakespeare’s plays—overflowing with ambition, greed, love, deceit, betrayal, and revenge—naturally have particular resonance for criminal convicts.

“Shakespeare’s tragic figures are very much imprisoned by both their circumstances and their choices,” says Scott Hayes, an associate dean in the School of Communication and Creative Arts at Liberty University and a seasoned Shakespearean actor and director. “Prisoners connect deeply with that sense of imprisonment. The consequences of choices made by Shakespeare’s characters are tremendous, and the prisoners truly understand and connect to the power our choices have to reap tragic consequences.”

Read the rest of the article here:  Why Shakespeare Belongs in Prison