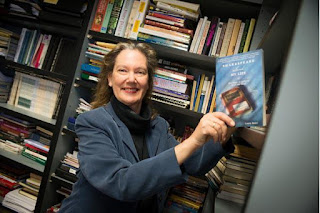 Can Shakespeare really touch the hearts of America's most hardened criminals?


By Marjorie Kehe, Books editor, The Christian Science Monitor / May 15, 2013


The concept of "Shakespeare behind bars" is not new. At least since 1995 there have been programs in some US prisons encouraging inmates to study and/or perform Shakespeare. But prisoners in solitary confinement? This group – considered to be the most dangerous and hardened inmates in the entire penal system – have always been excluded from such programs.

Until Laura Bates came along. Bates, a professor at Indiana State University and author of Shakespeare Saved My Life, recently talked with Monitor books editor Marjorie Kehe about her experiences teaching Shakespeare to inmates in a “supermax” long-term solitary confinement prison unit. Here are excerpts of their conversation.
Q: What gave you the idea of teaching Shakespeare to prisoners in solitary confinement?
Initially I got the idea to do volunteer work in prison because a friend of my husband’s was working in a maximum security prison. I sort of challenged the whole idea. I thought these maximum security prisoners were beyond rehabilitation. And so I started my own program [teaching college classes] at the local Chicago Cook County Jail with first-time offenders. I didn’t know what “supermax” was until one of my students was sent there. Flash-forward 25 years: Here I am teaching in supermax.

Q: Were you scared at first?
I want to say no but nobody’s going to believe me! I was definitely apprehensive. Of all the years I spent working in prisons, the most apprehensive that I ever felt was that first day that I entered the supermax unit.
But partly I think my background helped. I’m not a traditional academic. I grew up in inner-city Chicago. I worked my way through school. I didn’t end up getting a college degree until rather late in life.  My parents didn’t have college educations. So in a funny sort of way, I wasn’t as scared of prison as I was of college or academia!

Q: Can you tell us about Larry Newton, the convicted murderer who had been in solitary confinement for 10 years – and who became your star Shakespeare scholar?
Larry didn’t even know who Shakespeare was. I think that’s part of the beauty of this story. Larry [is like] so many other prisoner readers ... [who] didn’t have a teacher at high school or college feeding them their Shakespeare. They directly connect to Shakespeare. And that’s something that Larry did on a very, very personal level. [While reading “Macbeth”] Larry said that he found himself questioning Macbeth’s motives: Why does he do this deed that he knows is wrong? Why does he give in to peer pressure?
Larry [said that this led to] a very harsh analysis of himself. [He asked himself]: Why did I engage in a variety of criminal behaviors that I personally didn’t want to do? What was driving my motives? [And] that’s where he really found true freedom. [Editor’s note: Mr. Newton’s improved behavior after he began studying Shakespeare eventually led to his release from solitary confinement. He has since written a manual to help other inmates read Shakespeare.]

"Macbeth" is the first play I have the prisoners read. I felt like they would connect, that they would relate to the character of Macbeth who is a good man who is contemplating making a bad choice in killing an innocent person.

Q. And you've seen this kind of character analysis lead to personal reform?
Absolutely! That’s why it’s so important to get the word out [about these kinds of programs]. The Shakespeare program [at the Luther Luckett Correctional Complex in LaGrange, Ky.] and a handful of others tend to focus on the performance of the plays. And that’s a good thing in itself of course. But we use the plays exclusively to try to have the prisoners come to that kind of understanding of themselves. So it’s really about self-analysis and ultimately a change in their criminal behavior.

Q: Could this kind of program work using an author other than Shakespeare?
The beauty of Shakespeare is that his works are so open to multiple interpretations. And I think that is more true of Shakespeare than other literature. And then “Macbeth” in particular is a very important text to be used in prisons because it gets so into the head of a killer who at the beginning of the story is not a bad person. That’s a very important text for the prisoners.