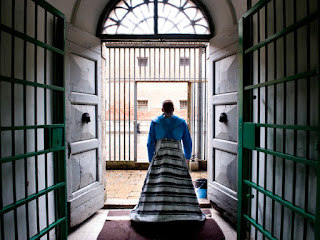 Every year, the inmates at Prison Volterra in Tuscany put on plays. They are directed by Armando Punzo, who established the “Compagnia della Fortezza” in 1988. About a third of the 170 men imprisoned participate. Many are dangerous felons, in prison for life. Most of them come from criminal gangs.

Prison theater is about redemption. It teaches prisoners  to work collaboratively. They become actors, not only prisoners.

They take their show around the country. One week they were performing in a small town close to the border with Austria. During the day they were free to walk around the town square without being guarded. After, they were driven to the local prison, where they slept in cells.

I asked a prisoner why no one tried to escape. He said: “Why should I run? Where would I go? Twenty years I’ve lived in prison. Now I have something to live for. Life has meaning.”

Clara Vannucci is an Italian photojournalist who divides her time between Italy and the United States.